I had been seeing these little moths flying about but trying to ignore them….bad move!

I can’t remember what it was that I looked for but something food wise under Alice’s bed. I pulled maybe a pasta bag and realised there is moths in it, OMG! We pulled out everything and they were everywhere. In sealed boxes of food, nests in any crevices and live maggots, jeez how disgusting is that?

We ended up throwing away a lot of food, bleached everything, from boxes to mattresses and realised the invasion came from weetbix bought in Tahiti. Now going to Australia, this is the last thing one needs onboard.

When we finally had everything organised again it was late and we were knackered. And I knew I had to do this procedure again, every couple of days until they’re all gone. For your info it took about a month. One lonely one flew out of a cupboard as we had bio security onboard in Brisbane……I nearly passed out seeing it……

Anyway, following morning getting ready to leave there was dark clouds over the horizon. I didn’t like the look of them but predict wind didn’t show anything particular nasty for next three days so we left. As soon as we were outside the reef the waves were huge. The weather soon closed in and it became shit weather. Calle ll was out there as well as another boat. Little comfort.

Alice was super sick all day and night, we hand steered, it rained, wind was 30 knots plus and it was never ending. Chris soaked most of the time as his oilies leaked like a sieve so I ended up steering when shit hit our way.

The next morning Alice woke up and she couldn’t move her limbs. We carried her in to the saloon and her eyes rolled in her face. Sort of panicked but quickly realised that she needed salt. And could I find the sachets of them, of course not. By this time I was thinking I have ruined her, the family , everything with my selfish ” I want to sail” and as I sobbed and searched I shouted to Chris to give her pure salt on her tongue.

At the same time we heard a bang upstairs and I thought ” this is it,” all down stairs and fuck knows what’s up there…..

I ran up telling Chris to attend to Alice and realised the auto helm just gave up in the big waves and the sails were all over the place….as I stood there, tears streaming down my cheeks, thinking of plan b if Alice didn’t get better. Keep sailing to Vanuatu or turn back ( not a good idea ) or call for help and get her lifted 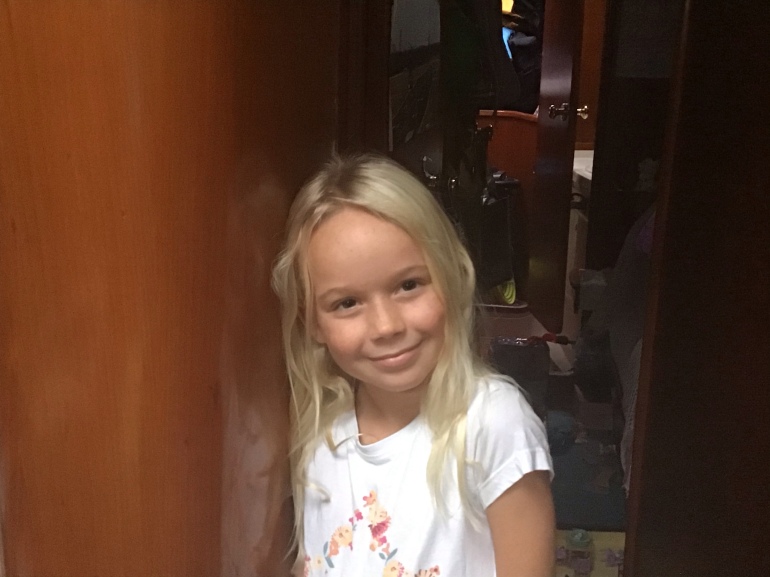 No sooner Chris shouted that she’s ok, absolutely fine. Oh what a relief.

So lesson learnt: We gave her plenty of water but didn’t think that water maker water is so pure so it has no salts or minerals in it…..and now we have the salt mix sachets ready right there in the galley!

Two days of rain, more rain and high winds. Day and night. On the third day the sun broke through the grey mass and it was glorious. Got stuff dried up, the wind calmed down and we all felt better.

We arrived in Vanuatu on the Tanna island in the middle of the night. Slowly we inched in and anchored. Phew! What a feeling, we survived. Out came the beers and as we sat there we realised we could see the glow of the world famous volcano just on the other side of the hill. Exciting!

And we were going to climb it!