After checking the boat over we were ready to go. Sad, as we wanted to stay longer but got to move on when weather is good.

We and s/y Abrazo left at the same time. Morgan, the boys friend was onboard so it was nice to know that they would see each other again in Pitcairn.

First few days were great, sunny and easy winds. Then we had hell with rain, squalls and wind shifting from all the four corners. Bloody tired and pretty shitty moods. The waves were building up and of course we were helming. Lucky we knew it would only take around 7 days.

the waves were pretty big and rolly so couldn’t anchor in Bounty bay in front of the village. We sailed around to the other side called Tedside and anchored. Only boat…..and bloody rolly.

We had a nice chat on the vhf with one of the ladies on the island who asked us if we were ok or needed anything. We were good. We knew the wind would die in the next couple of days so we would just wait it out.

We saw their supply ship anchor near us and watching them offload the fuel were hair raising…..the lancha boat tied up to the big ship and both moving in different time in the big seas. Not easy… 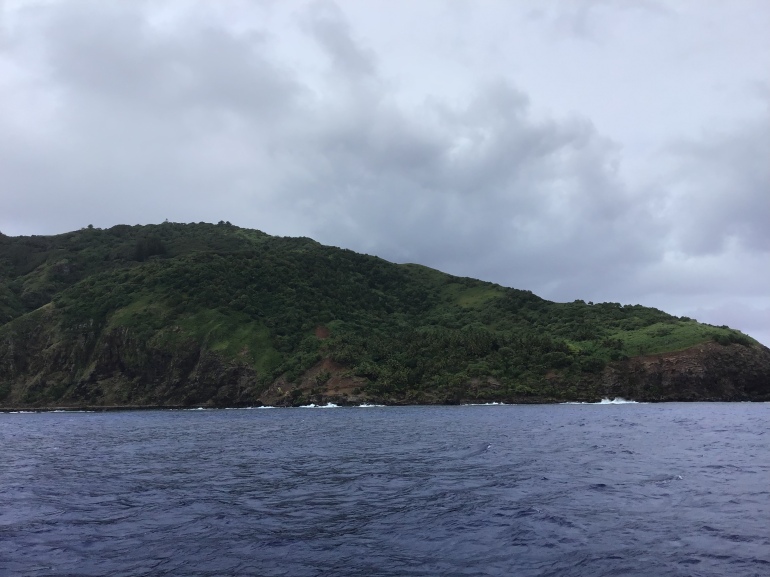 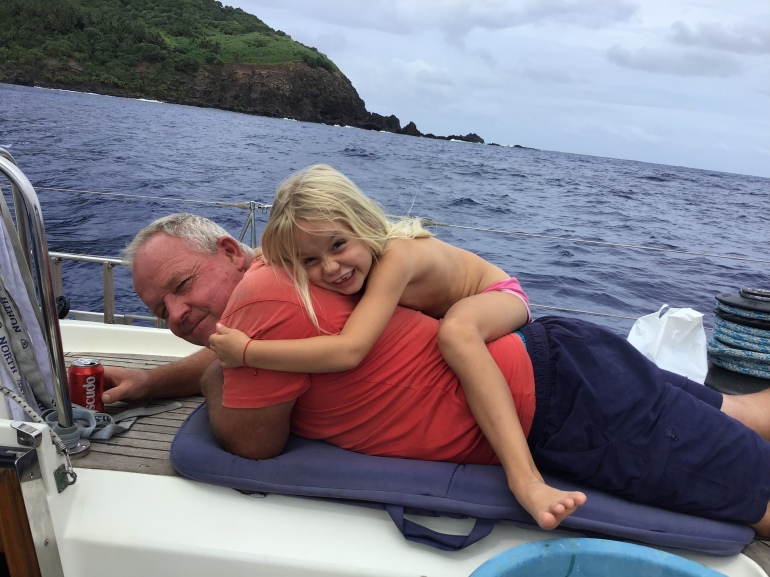 On the third day we moved over to Bounty bay. Seas under 2 m but still very rolly. The water is amazingly clear and we could check the anchor just by looking at it from above. The toerails were dipping in water as we rolled from side to side, but as we were used to rolly going nobody felt sick.

As Bounty bay is of similar entrance as in Easter island I was very happy to pay for them to get us with their lancha. Again going in was a breeze and standing on land again made us sway in a funny way.

We were welcomed by the islanders with a necklace. Amazing to have made it there 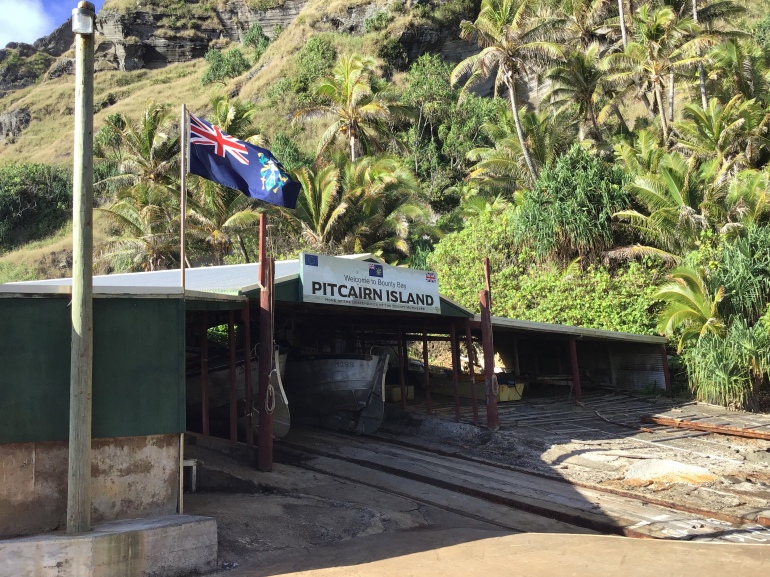 Abrazo turned up as well so boys back in town

So these three nutters decided to go for a walk. While we went to the square where everything is. The post office, library and food shop. 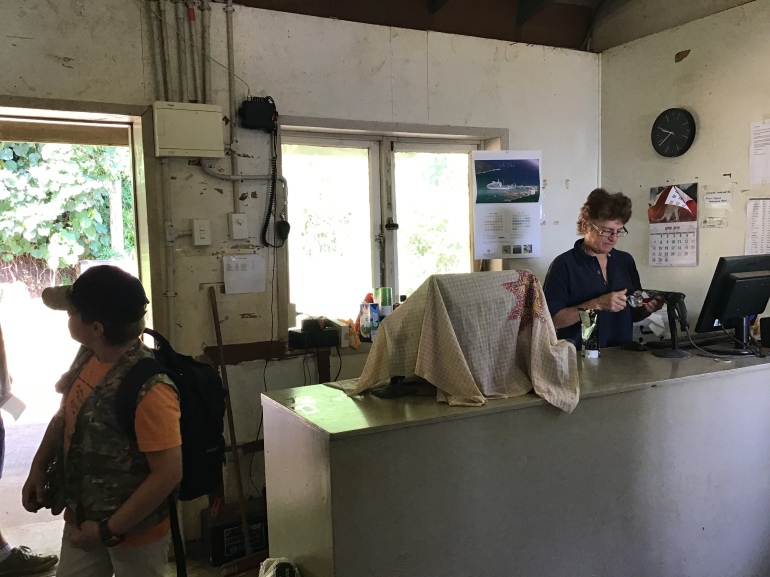 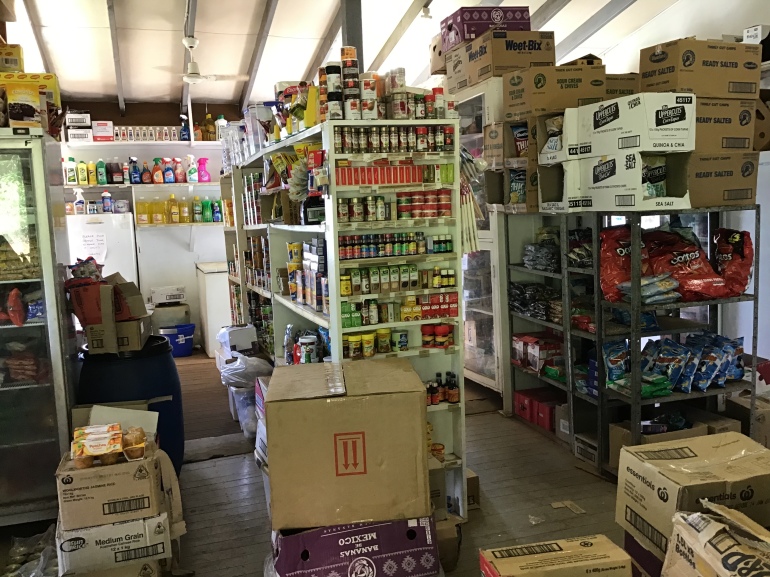 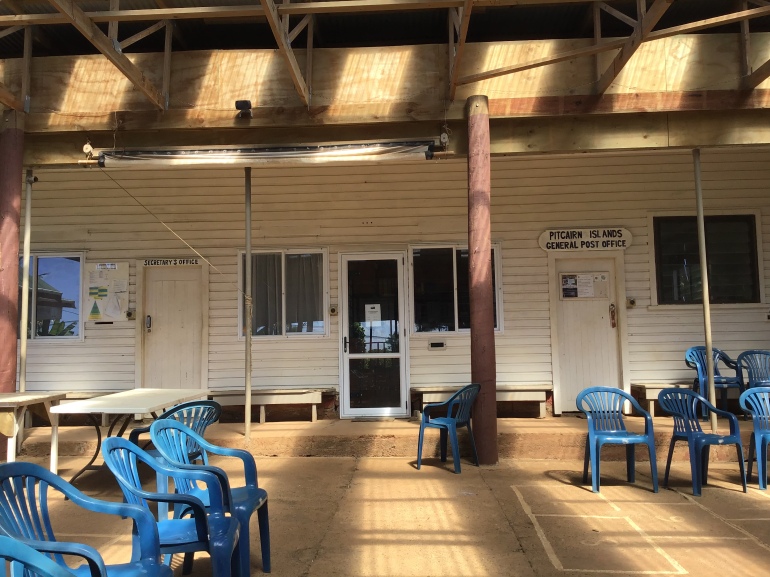 We bought stamps and a book about Pitcairn and admired the Bounty anchor.

Suddenly we thought, where’s the boys? Chris took a walk down the road, came back and said ” no idea”.

I mean, how big is the island.

The police woman came by and she took a ride on the quad bike looking for them but no luck. Somebody else put a call out on vhf channel 16 asking if anybody had seen them……only silence….

Now I was getting worried. Not that you would disappear just like that but accidents happens…..

Finally the police woman came back with the three musketeers who had walked almost all the way up to Christians cave, a bloody dangerous track and luckily they had the brains to not go all the way. We walked there the next day and we couldn’t even make it…but they had fun with cracking coconuts and doing survival!

Going back to the boat was another trip from hell as we had to go out against the waves. I sat next to a local young man and I was hanging on his arm, eyes shut and hyper ventilating as I could hear the other person from the top counting the waves and telling the driver when to go.

The next day we came back ashore and went for a walk.

There is Moody Finn and Abrazo.

Also saw the grave of John Adams, the last surviving mutineer who sorted the whole sorry mess out and schooled and preached good living. The others killed each other one by one, torn in jealousy and as there wasn’t enough women around it got nasty. Look up the history, fascinating. 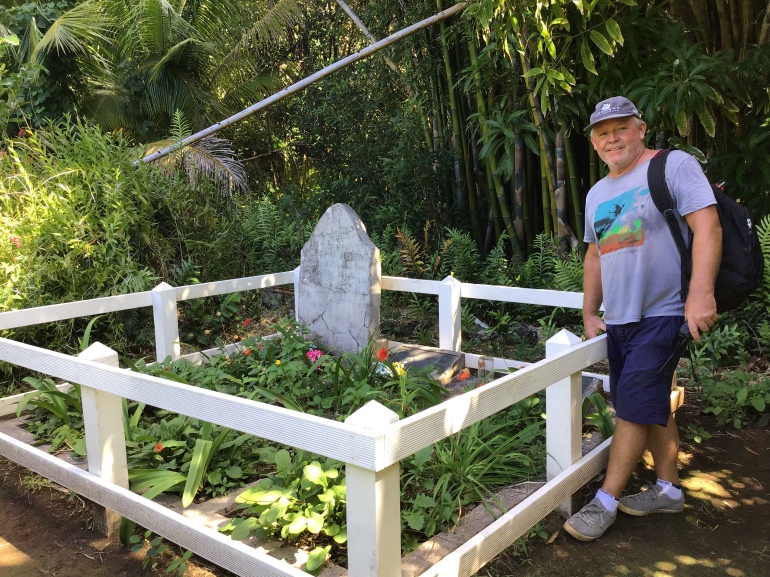 This is how the supplies get ashore. In a lancha, quick tie up and straight on a truck. Got to work fast.

And here are the musketeers having a swim and sitting in a bath. Not the most pleasant swim place.

We only got two days ashore, we were lucky as sometimes it’s just to rough to get ashore.

We had to say goodbye to these amazing, strong and kind people of Pitcairn as wind was shifting and we had to go back to Tedside.