Just so much to write again…..where to start…. 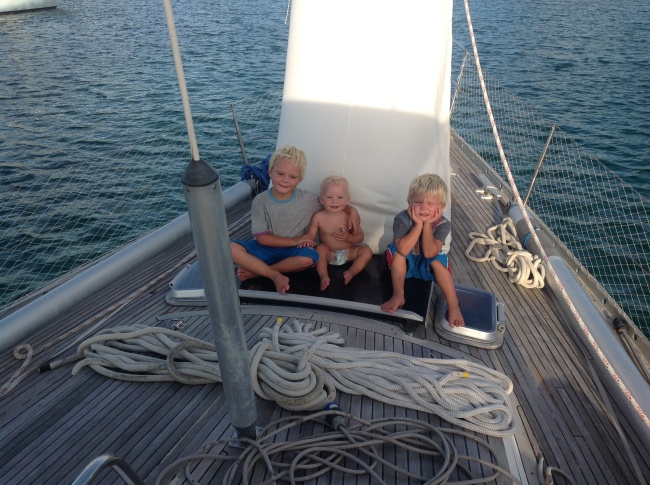 So the school started and first day went badly wrong! James kicked off, I’m not doing it etc and I obviously blew my top.So he ended in his bunk for 40 min. Harsh yes but I’m not starting my days with fights and tantrums. And it worked! We have had some amazing days where he flies through the work and some less impressive ones where he sits and doodles….but no play unless things are done…
Chris does the schooling and we are both learning so much again. It’s fun.I do little bits with Charlie who can recognise over half of the alphabet and loves maths as well.hopefully he too will have Chris’s maths head!

Couple of weeks ago we went over to Jennis house. And took a slippery walk down to her fresh water river at the bottom of the garden.There we met some locals and they where doing an oil down. Cooking over fire and chucking whatever in the pot….so we had lobster/ turtle/ fish mix and vegetables and it was good.I don’t usually choose turtle but there it would have been rude to say no.It’s free food for locals and right for them even if I don’t agree with it:/

The boys have met a new best friend, Zelda from states.She is lovely, 7 years and my two walk/ stalk and follow her everywhere. We don’t see them whole day.They go off swimming,rock climbing or fishing.Her grand parents rented a cottage so they even had a sleep over.How fab!! And it was Charlie’s first ever sleep over.All went super.A bit empty in the boat, looking at their beds that evening…I had a lump in my throat and belly…

Anyway, boat things…Garmin chart plotter came.We got all excited and…..it bloody didn’t work.WHAT? Second unit AND Yet again it didn’t work. What’s going on? Lots more phone calls and a new one promised to be sent.Oh well, we can still go sailing.

And we prepared, few hiccups like the anchor windlass played dead.Fixed it and no depth sounder…we can do this trip without it.Chartplotter will give us overall info and we know the places we were going to so off we went. Sailed on the windward side of Grenada, the Atlantic side and we had the most amazing sail.Steady winds, calm seas and this boat is so much faster then the old one so we flew over the waives. Caught a tuna, hurrah as tuna costs on arm and an leg in Uk:)))
So we arrived in Carriacou, Tyrell bay, dropped anchor perfectly and sat down with an ice cold beer from the amazing freezer!

The story goes on as we went to Tobago keys and ended up with no power but will write that a bit later as madam is awake:)